Up & Down restaurant in Budapest 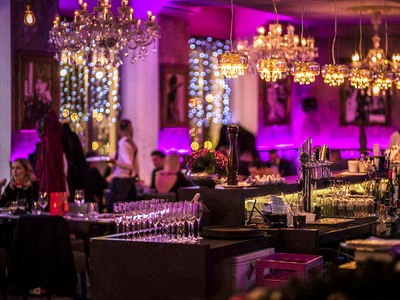 In the centre of Budapest, next to the Great Market Hall, with its unique panoramic view & Hungarian-Asian cuisine, restaurant Up & Down awaits its guests.

Up&Down is both edgy and elegant, a real fusion restaurant, combining Hungarian, French and Asian cuisine, fine dining and bistro, a layed-back atmosphere with professional service. The cuisine is adventurous and cutting edge, not afraid to use novel methods or molecular gastronomy. Budapest’s latest meeting point welcomes its guests, with a unique design and an ever changing, exciting menu, based at the foot of the Szabadság Bridge on Fővám Square, with a spectacular view to the Gellért Hill. Using the finest, freshest ingredients, the chefs produce imaginative, at times daring culinary masterpieces.

The restaurants decor reflects, the upper middle class elegance characteristic of Budapest, it has a subtly provocative interior. The walls bear the remnants of elaborate stuccoes, and, „leak” stains, the crystal chandeliers are complemented with light bulbs, hanging on wires and sockets, faded patterns on the floor, eroded tiles on the side walls, and the scribbles and graffities of all sorts of unauthorized intruders... They all are man made visual elements, part of the carefully crafted display, forming a firm contrast with the modern furniture. The faded patterns and their placement, were exquisitely designed for all surfaces by interior designer, Péter Veres, they were implemented in ways most suitable for the given surface. On stone, he used milling, tracery on wall panels, acid milling on glass surfaces, and layers of lace on the countertops reminiscent of the banks of the river Danube. The lighting resembles the shifting of eras: the crystal chandeliers evoking the splendour of past periods alongside the „Russian chandelier’s” numerous light bulbs, displaying the nonchalance of the following epoch.
To further the contrast, hanging on the walls are over exposed Helmut Newton photos, with a sixties feel to them, they are fitted in classic frames, which with their lack of colour and almost bizarre themes, complement the colourful background lighting.
The ground floor also is a memento to the past, to its’ industrialism, with its fuming, soot breathing machines, its steaming pipes and electric switches ‚smelling of ampere’. The bar counter is made of wavy metal shutters, previously used to protect shop windows, the office door has been demounted from an actual prison cell. In the rear corner a compressor made from a motorbike block, and the door of a cargo lift concludes the visual impressions.

Up & Down restaurant has the following menus available: