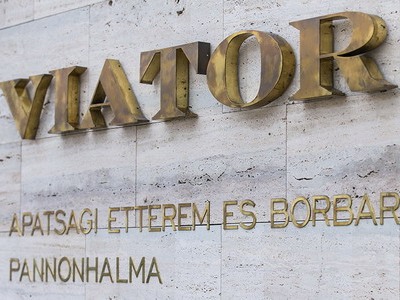 The VIATOR Abbey Restaurant and Wine Bar opened 28th May 2010 on the Kosaras Hill of Pannonhalma, in the direct vicinity of the Archabbey Pannonhalma. In 2015 it celebrated its five year anniversary; however, its original objectives have been constant since its establishment: it strives to express the hospitality of the Benedictine community of Pannonhalma through the means of gastronomy, combining tradition and modernity in every respect.

The building itself is a contemporary snapshot of the combination of the functional and aesthetic architecture which reflects the pursuit of simplicity of the monks; however, its substance is revealed first when stepping into its inner space: it rises above the town of Pannonhalma, the Pannonian landscape and the vineyards of the abbey, thereby bringing the guest closer to the view and the spirituality of the monastery simultaneously.

The team consisting of staff devoted for the place and the Benedictine community is managed by the chef Gábor Gyurik in the kitchen and by restaurant manager Gábor Takács in the service.

The menu is remarkably varied, seasonally renewed and is supplemented by the seasonal insets based on a special raw material. The extent of the selection is, however, at all times consciously constricted. The high quality raw material, purchased as far as possible from the farmers in the near vicinity, is characteristically combined with the crops of the herb and spice garden of the abbey, mainly lavender, thyme, lemon grass, rosemary and sage.

VIATOR as the reference restaurant of the Abbey Winery Pannonhalma lays a special emphasis on wines. The wines from the Benedictine winery, re-established in 2003, gain an almost exclusive role, from which older vintages, not available at the winery any longer, may still be found in the assortment of the restaurant.

Beside its local interests, the VIATOR Restaurant is apparent also in a wider circle, for example as an exhibitor of high-standard Hungarian gastronomic events or as a member of the association Stylish Rural Gastronomy (Stílusos Vidéki Éttermiség – SVÉT), focusing on the personality and high quality of small and medium-sized provincial cuisines.

From the summer of 2014, also the PAUSA Abbey Café is operated by the restaurant. The café is located on the main square of the town in the Abbey Grange Visitor’s Centre that gives room for the Pannonhalma Abbey Museum. It wishes to spread the culture of patisseries and coffee-houses in Pannonhalma and its wider surrounding according to the principles represented the restaurant.

Thanks to its technically fully equipped conference venue, VIATOR, located midway between Vienna and Budapest and in the near vicinity of Győr, may be the optimal choice for business meetings, professional trainings, team buildings and scientific symposiums but due to its location in the area of the Bakony Mountains and Sokoró Hills, it is also the imposing pit stop for excursionists and hikers as well as it is a unique spot for family and friendly get-togethers and celebrations or simply for a light meal or dinner. Whichever goal the visitor may arrive with, the VIATOR Restaurant offers physical and spiritual recreation for the everyday travellers, the “viators”.